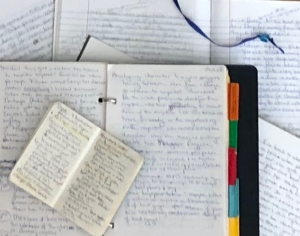 While we’re all anxiously awaiting the start of the WordWacker Photo Challenge, I’m going to take stock of where I am now and what I have planned regarding my writing.

Yes – the next book! It will be another contemporary fantasy, with a character in our world who initially has no idea magic is a thing. I’m just getting started so I haven’t figured out yet whether the bulk of the action will take place here, in our world but with magical elements (that’s what the current novel is), or whether she’ll be transported Elsewhere, to where the magic is dominant. Although the current book has definite series potential, this new one is not a sequel. I don’t know yet whether I’ll be able to sell the first one, and if not then I obviously won’t be able to sell a sequel. If this new one sells, though, I’ll have the first one in the drawer and ready to offer.

There are three things I’ve noticed as I go about this process.

I’ve given myself a challenge: I’m going to try to get the major plotting and planning done in another two weeks, and then write a first draft in Camp NaNoWriMo in July. That will be a tall order and I wouldn’t put a high percentage on it, but hey, it could happen! I’ll let you know how that’s going.

So that’s where I am with my writing. How are things with you? I’d love to hear from you.

1 thought on “Some Writing Updates”