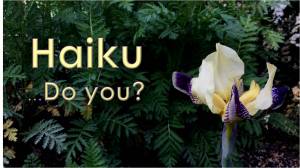 If you’ve been following me for a while, you know I’ve used haiku puzzles for my theme in the April A-Z Challenge for the last three years. Haiku is an ancient Japanese form that’s been adapted to English in a few ways, but the most common is three lines of 5, 7, and 5 syllables each. It focuses on sensory images that conjure a specific moment in time, and traditionally contains two images with some form of cutting between lines to separate them, with the cut either after the first or the second line. My haiku aren’t so traditional, though I adhere strictly to the 5-7-5 format.

I find haiku a lot of fun to write, which is why I use it for the challenge each year. Just recently, though, I discovered another outlet for my haiku obsession. On Twitter there’s a daily haiku challenge run by @baffled. Each morning at 8:00 am Eastern time, they post a word, and people are invited to create a haiku that includes that word. People use different haiku forms and some post to the #haikuchallenge tag with different key words. If you like haiku, or any form of micropoetry, you should check it out. You can see my most recent offerings in the Twitter roll, which you’ll find either on the right side of the browser window or the bottom of the scroll in the mobile version. I invite you to join in as well.

Such tiny poems ~
To inspire such imagery ~
I haiku…do you? ~