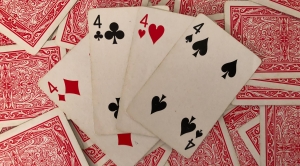 Today is the birthday of the WordWacker blog. It’s 4 years old today, and I’m celebrating by looking back and looking ahead. As always, let’s begin with some statistics:

Looking at my blog posts over this past year, here’s what I find.

Looking ahead, what do I see for the blog?

Oh, and there’s one more really important thing I want to say:

Thank you to my followers!
You make it worthwhile!