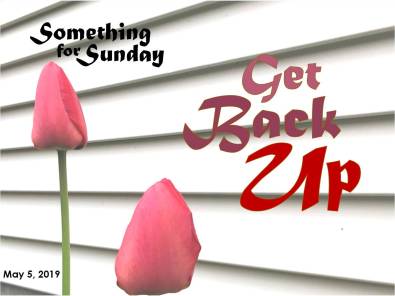 This week, the tulips bloomed at my house, as they’ve done every year since we moved here in 1994. I’ve written about this tulip plant before. We are not good gardeners. The only tulips on the property were planted by the previous owners. Tulips, gardener friends tell me, need some care. You’re supposed to lift them and divide them and whatnot. We’ve never done anything like that. This particular plant is inches away from a new addition, where the ground was dug up by heavy equipment to put in the foundation. Yet, every year, the tulip plant comes back. It’s my superhero.

Also this week, I finally managed to see Captain Marvel. As a fan of superheroes and a feminist, I loved it, of course. There are so many things I could point to that were wonderful about it, but I’m going to focus on just one small bit, and tie it to the tulips and to a larger meditation on evolution and what makes humans special.

If you haven’t seen Captain Marvel yet, no worries. The moment in the movie I’m going to talk about comes toward the end, but it’s not really a spoiler, since they put it in the trailer. Go ahead and watch the clip. I’ll wait.

In the trailer, we see the hero do a bunch of heroic things. She jumps on a moving train and zaps somebody with her magic fists. She punches an old lady in the face (trust me, she had it coming). She floats in her super-suit, wreathed in electricity, eyes glowing. But when the music reaches a climax, what do we see? A girl, a woman, doing one heroic thing over and over: She gets back up.

I loved her character throughout the movie. She was smart and brave and snarky. She struggled to understand where she came from and her role in the war she had landed in. She had amazing superpowers. But for me, that moment, when we watched her get up, and get up, and get up—that’s when I really fell in love.

One thing about us humans is that we often don’t have enough respect for the things we’re really good at. Another day I’ll rant about our mental processes, and how we’ve only recently realized how extraordinary they are. For today, I’m going to talk about persistence. We idolize the heroes that are super fast, or super strong, or can do magic, or have psychic powers. We don’t have any jogging heroes, but maybe we should. In truth, that’s our superpower.

Look at early humans and our prehuman ancestors. They weren’t especially fast or strong. They didn’t have fangs or claws or tough hides. You might wonder how we managed to avoid extinction, competing with the deadly predators in the savannas of Africa for the region’s nimble prey. It turns out that our earliest hunting strategy was probably persistence hunting. Daniel Lieberman, Harvard professor of anthropology and international expert on running, eloquently describes the many physical adaptations humans have that explain how humans can run greater distances than any other animal. Some gazelles can run at 60 mph for up to 10 miles, but then they will have to slow down or they will overheat and collapse. The human, meanwhile, trots along at maybe 5 mph, but can keep it up all day. When the gazelle has staggered to a halt and fallen, gasping, to its knees, the human can jog up and club it over the head. That’s what enabled us to become fearsome predators and eventually to rule the earth.

I remember when I first learned of this underrated human ability. Back in 1986, Analog published an essay by fantasy author Rick Cook called “The Long Stern Chase: A Speculative Exercise” in which he quotes an African proverb:

Cook then added his own twist:

A human wakes up thinking, “To hell with who’s fastest, I’ll outlast the bastards.”

Cook says that since endurance running was crucial in human evolution, it should be important to writers, particularly speculative fiction writers. There’s a science fiction trope about scrappy humans defeating alien invaders through cleverness (everything from Alien to Independence Day to Galaxy Quest), but not enough about simply wearing them down through persistence. If we do run into scary alien enemies out there, Cook says, what’s going to save us is that we Just. Don’t. Stop.

So to me, that’s what made Captain Marvel a superhero. She reminds me of the tulips that just keep coming back, no matter what. Sure, the magic fists and super suit are awesome, but the real deal is that she just kept getting back up.

That’s a superpower we can all understand.